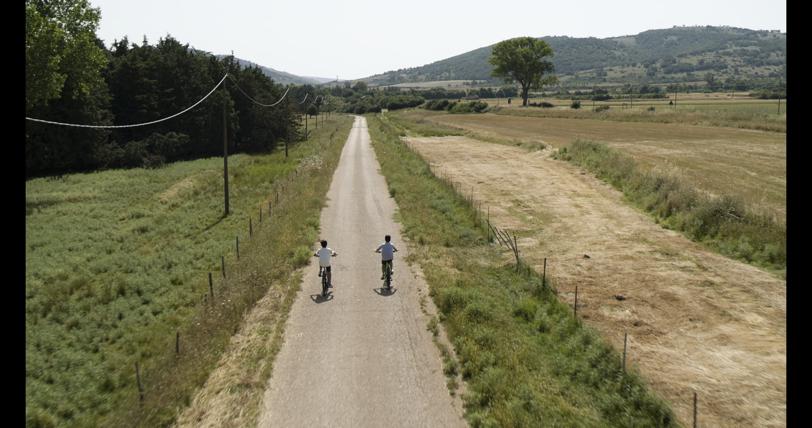 Two boys intrigued and united by the strength of friendship and faith embark on a journey in search of Padre Pio and his miracles, a holy friar from southern Italy.

The film takes place in our time.

LUCA is a 12 year old boy from San Giovanni Rotondo (south of Italy). He is intelligent, sharp witted and determined. One day, while eating supper at home, after spending the day visiting the church and museum of Padre Pio, he tells his parents about his plan to conduct a research among the people in his town who knew Padre Pio, the older people whom he wanted to interview to gather their testimonies, in order to write a book on the saint of Gargano. LUCA has a ten year old sister (MIRANDA). The family is a close one, the father is a scientist, a researcher at Padre Pio Hospital.

LUCA goes to see his friend, SEBASTIANO, of San Marco in Lamis (4 km from S. Giovanni Rotondo), to ask him to collaborate on his initiative. SEBASTIANO accepts. He is a 13-year-old boy, available, amiable, sometimes joking, despite a complex and difficult family situation: his mother is seriously sick, his father is a bit in conflict with his son. SEBASTIANO is an only child.

The two boys begin their investigations by interviewing three characters, (two Capuchin Friars and one old lady) who have known PADRE PIO when they were young and who have spoken with him (real witnesses of his miracles, charisms, extraordinary gifts, his sufferings and his configuration to the Cross of Christ ). We are faced with the new generation that discovers PADRE PIO, confronted with the one that has known him. These three characters have truly known Pader Pio and fit in to the story of this narrative fiction film.

Between one interview and another, the two exchange their impressions, with arguments, amusing episodes and boyish banter, alternating with some very moving moments.There is a series of amusing dialogues, for example between LUCA and his little sister MIRANDA, between the two main charactors, between the two main charactors and their friends and some town people. Then we witness the stories of the two families. The health of SEBASTIANO'S mother is deteriorating. So is his father's health, due to alcohol.

During a fight, SEBASTIANO is slapped in his face by his father. He meets LUCA in the ancient church of Padre Pio where LUCA comforts him. On their bikes they pass the plains between San Giovanni Rotondo and Monte Sant'Angelo. When they arrive at a fountain, LUCA tells SEBASTIANO his parents agreed to let him go with him to Pietralcina.

One day the two boys leave toghter with the UNCLE of SEBASTIANO for Pietrelcina ….and…Something happens…

Who was Padre Pio?

Padre Pio was a saintly capuchin  friar from the southern Italian town of Pietrelcina who lived  his ministry in San Giovanni Rotondo.  He died in 1968, for fifty years he had on his hands, feet and sides the wounds of the stigmata of Jesus Christ.  He had extraordinary gifts – he could read the minds and souls of all people who came close to him (their past and their future).
He performed  numerous and incredible miracles.
Today there are tens of thousands of devotees  of Padre Pio throughout the world.
Up